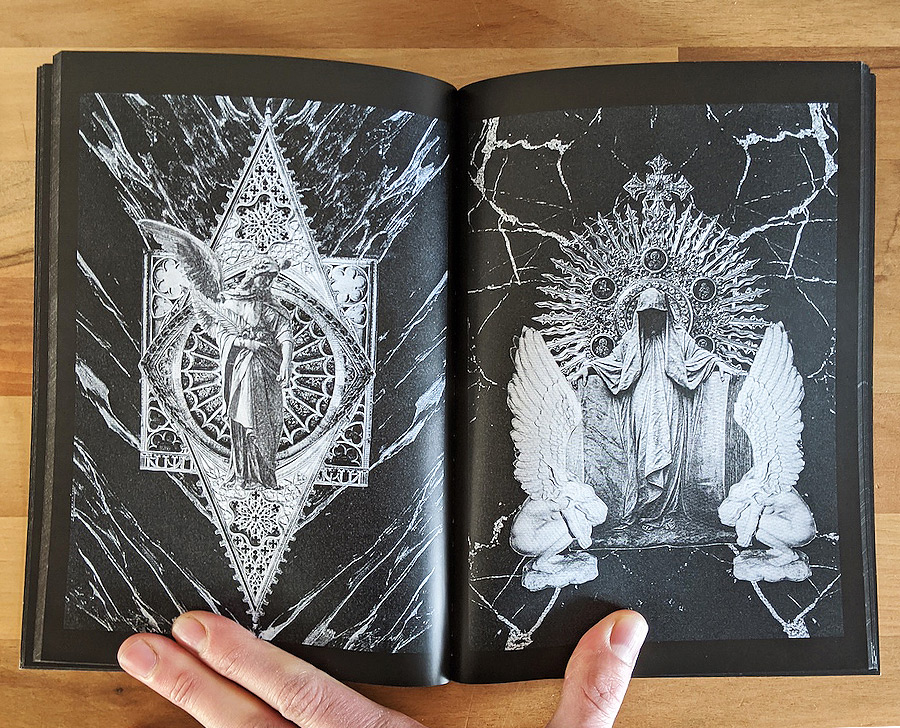 I’m Ewan Aparicio, I’m a collage artist and publisher based in London. I don’t have any formal art background, I started doing collage as a hobby until it became something I do in almost all my free time. I get the urge to be creative and productive regularly and found that this was the best way to express that.

Input Error, my website, is where I release art zines and books primarily focused on collage, but there have also been books geared towards illustration and photography. There have been solo books of my own art and other artists, as well as multi-artist books that I’ve compiled.

How would you describe the Input Error’s curatorial identity?

A large motivating factor behind starting the site was to publish work by artists that I really admired, so a key part of that identity would be my own personal tastes. Some people may describe it as ‘dark’ or ‘macabre’, and I’ve had those terms mentioned about my own work too, but personally I’ve never seen it that way. Collage can be a very diverse style of art, and I find I’ll often lean towards the more surreal or otherworldly images as they occupy a space that exists in our imaginations or dreams. That’s also reflected in the music and films that I watch, as sometimes ideas from those will bleed into my own work. 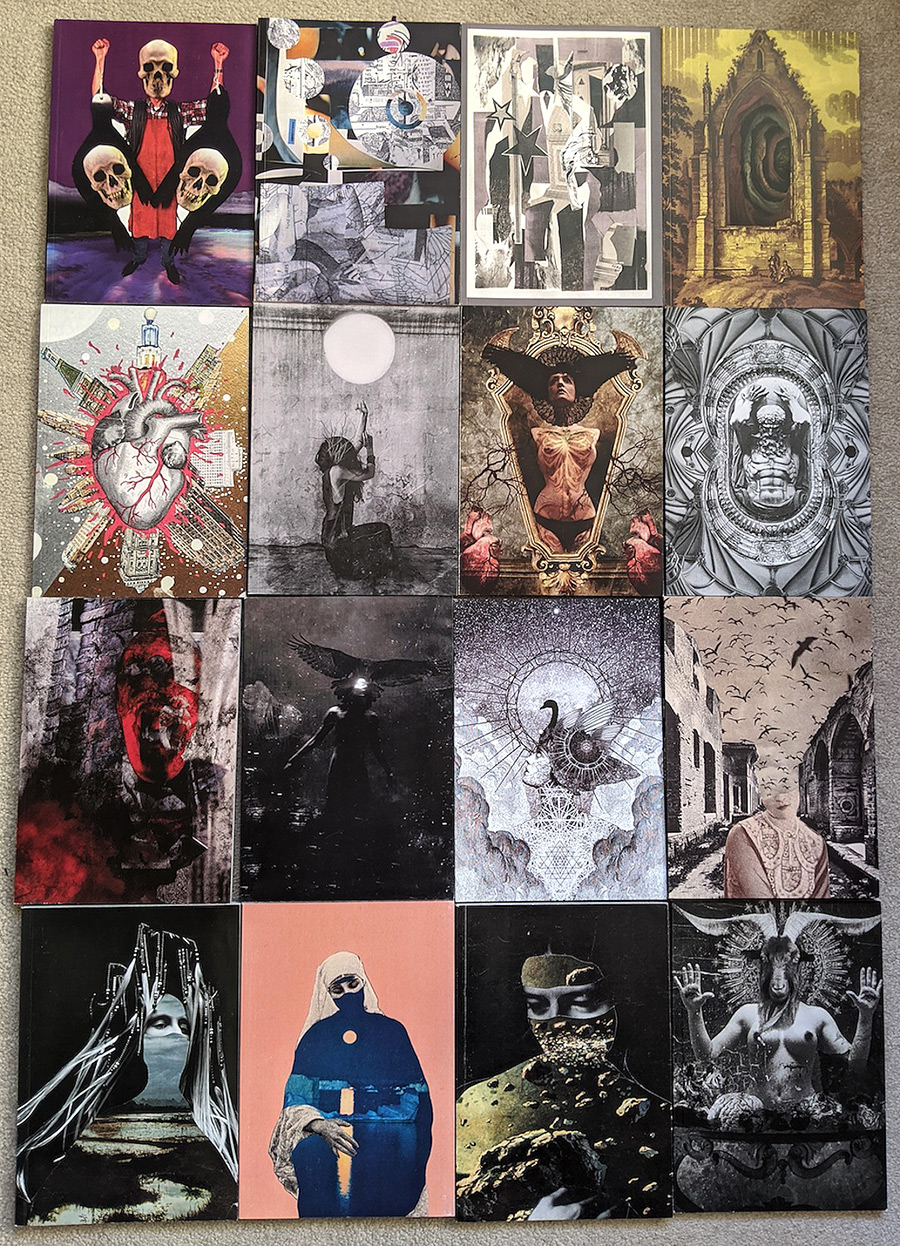 How did you start to create zines? And when the Input Error came into play?

The first thing I ever published, pre Input Error, was a zine of my own work called Planned Obsolescence in 2014. Looking back at it now I can see how my own work has formed more of its own style, as well as how I’ve improved in terms of doing the layouts!

After that, I started thinking about how there were so many artists whose work I wanted to see in printed form. For me, a physical format can bring out the best in art, so I started Input Error in or around 2015 and published the first of 5 issues of a zine called ‘Nothing/Forever’. I got to work with a lot of great artists and the reaction was really positive, with every issue selling out pretty fast. After that I started making larger books, speaking to more artists and publishing in full color, as previous zines had all been black and white. Then came solo books of other artists and eventually it snowballed. To date, I’ve published a total of 24 books and zines with more in the works right now.

What kind of creative process is it to make a zine? How easy is it to find or create the editorial ”red line” for each publication?

There are some slight variations depending on whether its a single or multi-artist book, but for the most part, it involves curating pieces from an artist or artists, working on the layout on my laptop to pair pieces until I get the feel and flow I think works best. After that, there’s a lot of time spent getting all the images and files ready for the specifications needed to print them, which can be a little tedious but it’s an important part of making sure everyone’s work is best represented. I wouldn’t print my work if I wasn’t 100% happy with it, and I wouldn’t do the same for anyone else’s.

I don’t really have any red lines, other than the work needs to fit the page dimensions and I won’t publish any works with extreme violence or pornography. 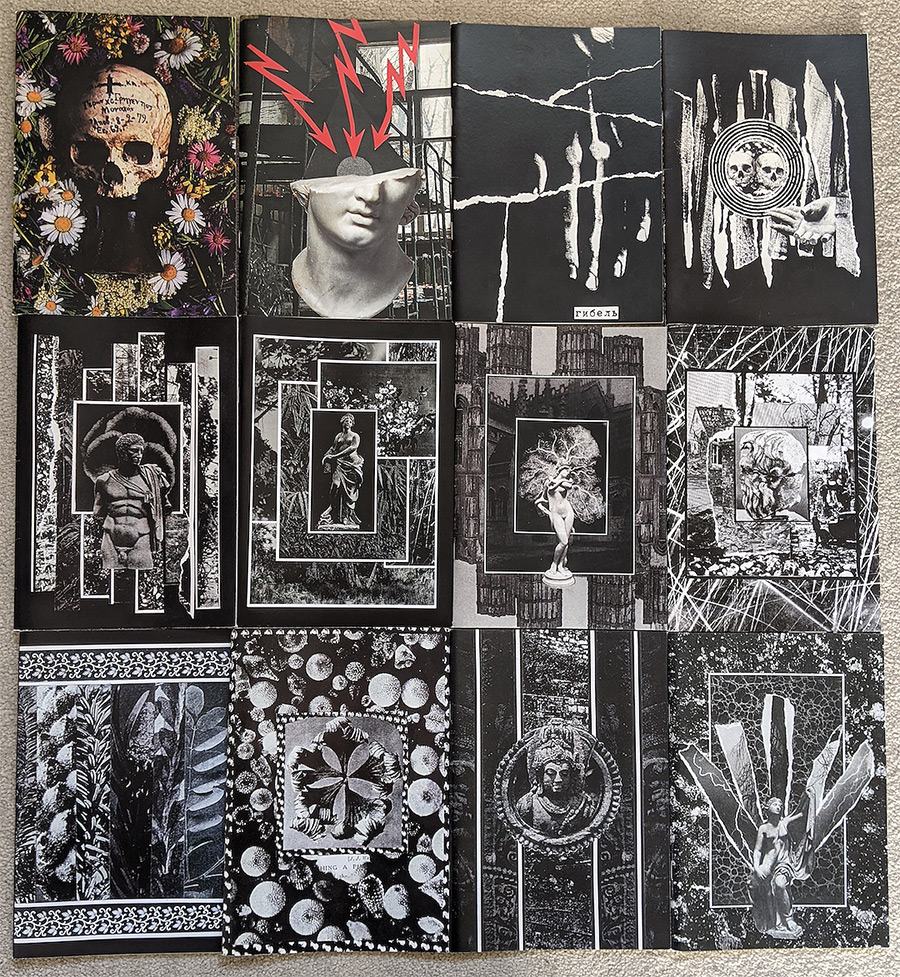 When building a new zine, do you have a clear vision of the outcome? How much you curate the works?

When it comes to a solo artist’s book I’d say less of a vision as such, I prefer they submit works they feel best to represent them and I try to create a flow in the book that works. A good example would be the books of øjeRum’s artwork, as his pieces all exist in separate series where the works take on similar themes or source materials. From there it’s a case of pairing works that blend well either because of their color set, or where particular works might complement each other in terms of a narrative.

For my own solo books, I usually start working with specific materials or an idea, and when I feel I have created as much as possible from them I’ll begin compiling them. My book ‘Dead Reckoning’ was more focused on photo collage, like a scrapbook of ideas and juxtapositions of images around nature and decay. When that was complete I began using more imagery of statues and cemetery architecture, which led to ‘The Unconscious Cause’ book and more recent pieces.

When it comes to multi-artist books, I do spend a fair bit of time planning out a shortlist of artists that I think will work well together before I even start contacting them to gauge interest. I usually ask for as many pieces as possible so that I can try different variations until it feels consistent, but to be honest, everyone I’ve worked with sends in great work which makes the job pretty easy! With ‘The Enduring Doubt’, a photo art book, all the artists involved worked in similar themes but with their own unique take or styles, so compiling it was very natural.

How do you see that being an artist reflects you as an editor? And how being an editor has affected you as an artist?

Firstly, as an artist I have an idea of how I like to present my work, so ensuring that the artist is happy with how theirs is presented is critical. The experience from working on so many books has also taught me about looking for a flow or narrative across the works that can be used to stitch them together.

In terms of how being an editor has affected me as an artist, I spend more time trying to edit a piece until I feel completely satisfied with it. In my early days I would rush off a piece before moving onto the next one, but then I’d often feel that there were other ideas I should have explored with the material or the piece. Sometimes I might start a piece, then not touch it again for months until I find the right source material or idea that ties it together.

Always a tough question as I’m really happy with all the books I’ve released! If push came to shove I’d have to pick the ‘Rites & Ceremonies’ book, as I got to work with many of my favorite artists and it felt like it came together organically, with each artist’s work complementing the others. I’ve worked with many of those artists on other projects since so I guess that’s a good sign too! The reaction to that book was particularly positive, it was available for sale at Treadwells Books in London where it sold out. That was really satisfying as it meant the books were reaching a new and wider audience.

I’m also really satisfied with my last solo book, ‘The Unconscious Cause’ which was the culmination of a year’s work where I’d been gradually starting to use more of my own photos as source material. 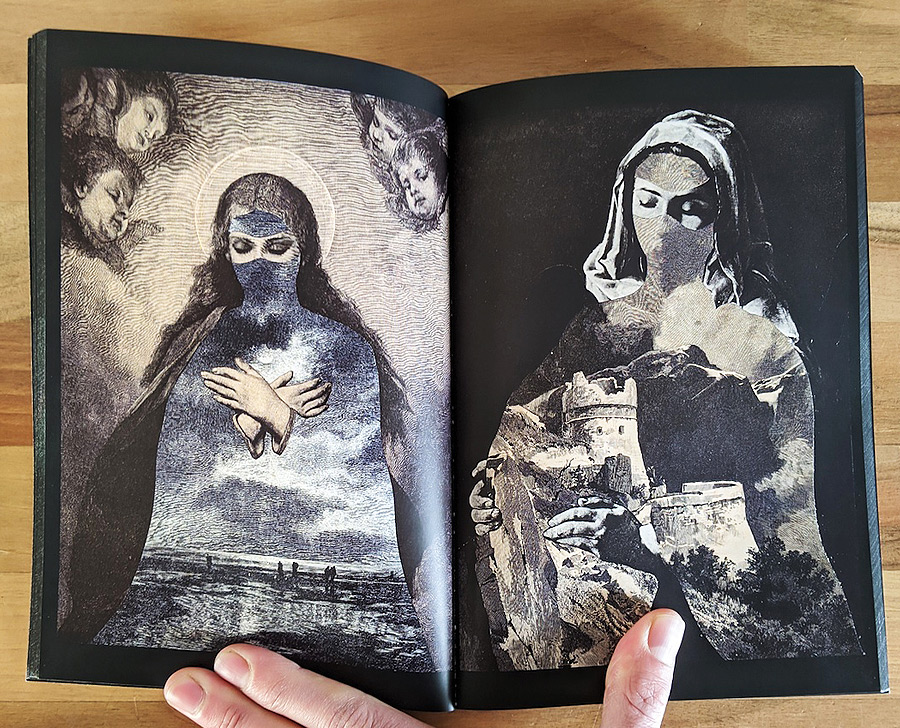 Both, the zine and collaging scenes are trending, what kind of future plans you have for the label?

I recently took a few months break from publishing after a pretty busy period in order to think about the direction. I’m just starting back up again with a few projects in the works. I’ve just released the second volume of øjeRum’s ‘Silent Figure With Landscape’. We’ve put out 4 books together now and I love his work, so its great to be working together again. He has a very unique and singular style and is able to continue finding more inspiration in the themes across his work.

I’m also excited to be putting together a book and cassette release for Temple Ov Saturn, which will combine music and collages influenced by Baudelaire’s ‘Flower Of Evil’ series. Joan is a great multimedia artist, working across collage, music, video and more, and also has a very defined, personal aesthetic. There might be another cassette and book combo with another artist, but it’s very early days on that one.

I’m working on pieces for a follow up to my last solo collage book, where I’m trying to use more of my own photography from the many trips exploring cemeteries with my wife. There are always ideas for other projects, with a lengthy shortlist, but I like to focus on the work at hand before getting distracted with future plans.

What would be your dream publication? Would there be a certain theme or concept or would it revolve around any particular artist?

I’d love to put together a full-sized, hardback book representing the artwork for my favorite record label. Its the work of a single artist who again has a very unique, almost diary-like style to their work. I’ve not asked them directly yet so I’m holding out saying who for now! Hopefully one day it will become a reality.

If you should describe Input Error with one word, what would it be? 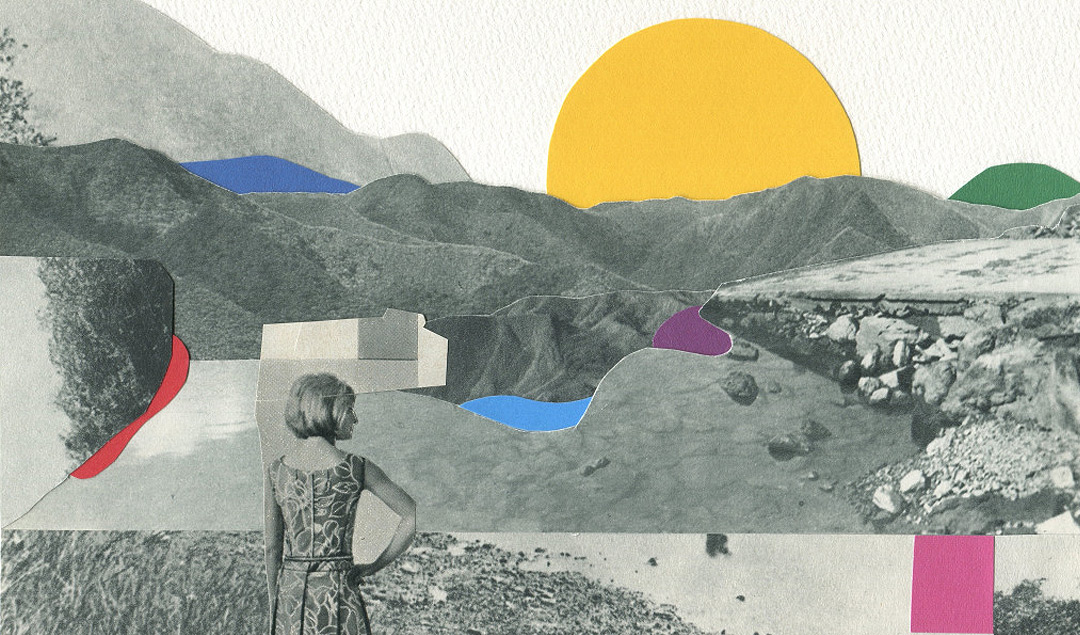 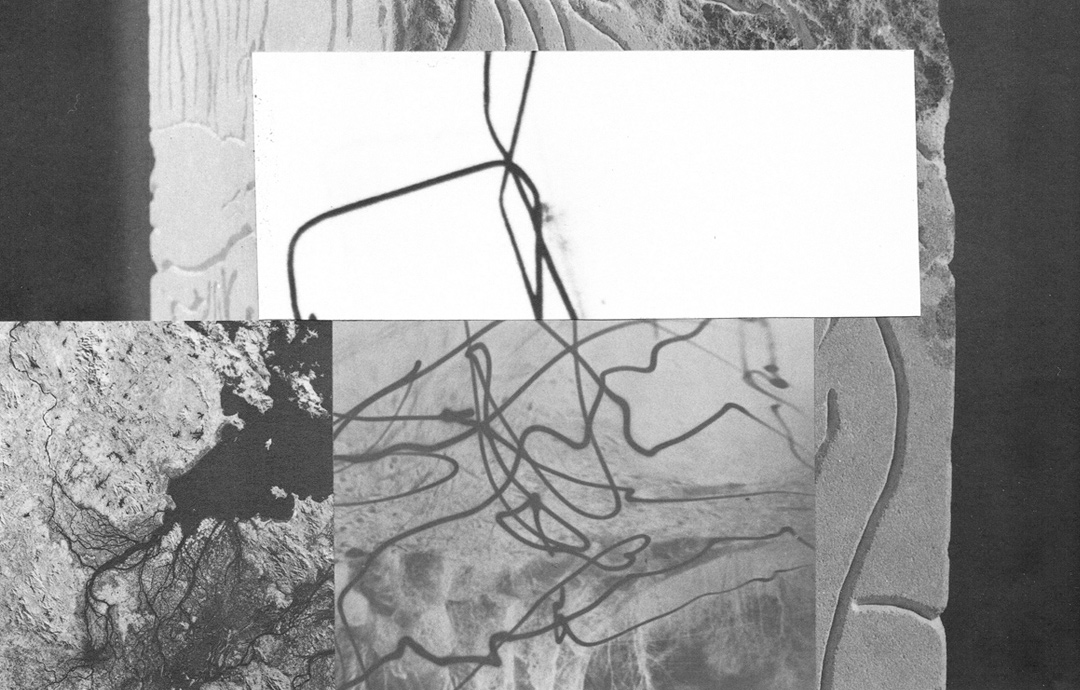 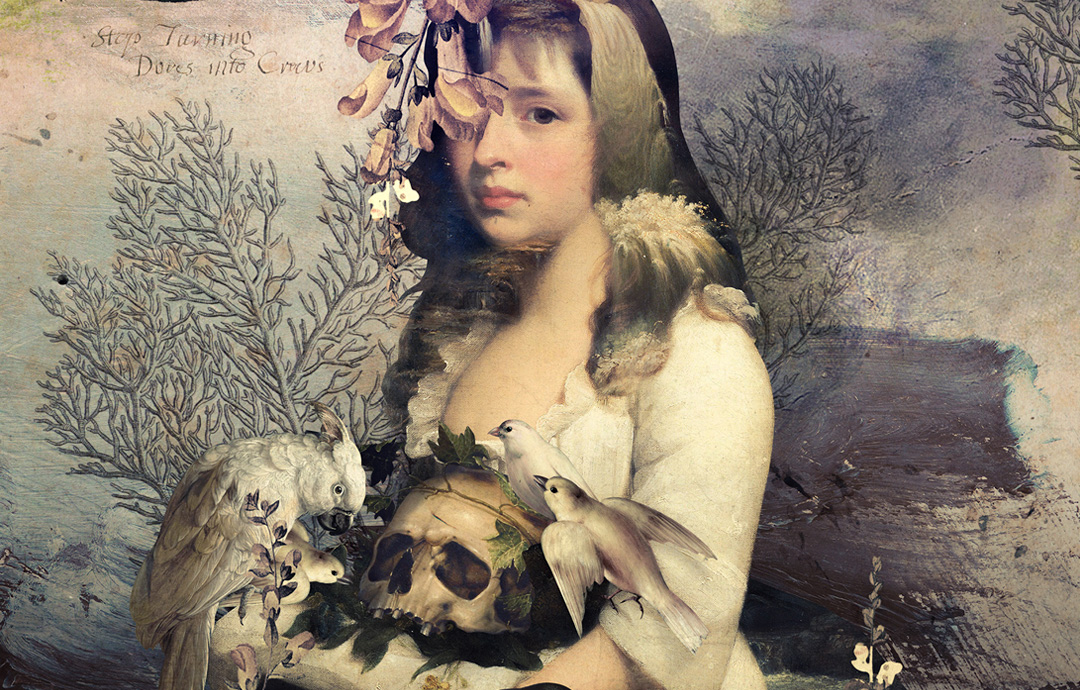