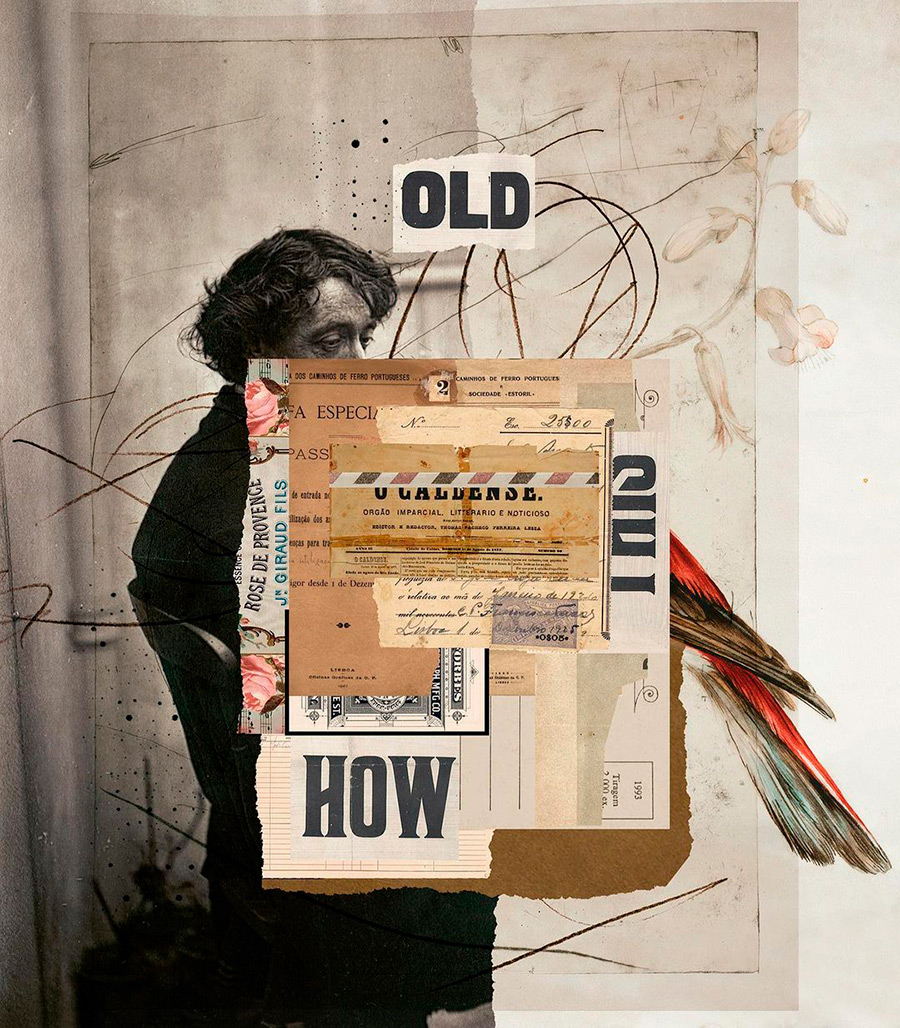 I’m Samuel Eller, designer, and professor of design, with a deformed look. I’m Brazilian, residing in the metropolitan region of Belo Horizonte. I’m a guy who is greedy to see, I like to see everything, I have a magnifying glass, which lifts leaves, shards, and stones to see all the smallest things. I like to bring out all the hidden or forgotten things under or inside other discarded things because they want me to care about them.

Why collages? And how did you started to do them?

As my professional training is in Graphic Design, through it I was able to get closer to other arts such as painting, photography, cinema, literature, and poetry, and my collage is the sum of it all. I started to make a collage as a result of all the knowledge and perception of the things I was accumulating, considering that they were the ones that improved my look. Since then, I make art for the simple pleasure of being alive, poetry and collage have given me a new sense of being, thinking, and doing. Little by little I was creating the courage to be able to show the studies and experiments that I create, social networks made it possible for me to show, to a larger group of people, what I have been doing. Everything I do is the result of where my eyes circulate, and for these things to have the status of art, I believe that they cannot be retained in me, it is necessary that they leave the drawer and reach the other, this brings me a feeling that I added something to someone… my look contributes too.

I don’t have a specific theme to make a collage. For me, the becoming of creation comes mainly from research, it is necessary to research a lot, I love the situation of research, it is through it that I can
register, gather, pile up, accumulate in excess everything that is given to me. As I said, I am greedy to see, I see everything, all the things that surround me provide me with information, and my mind, through imagination, wants to “transver”* all this accumulated (on the concept of “transver”, I appropriate the definition made by the Brazilian poet Manoel de Barros – about the transformations that occur through the creative imagination, which comes from the exercise of perception), and the collage allows me to make transformations, displacements, and symbolic exchanges, to change things from their place, their usual function allows to deconstruct and subvert. For that to happen, I just need to have any object printed in my hands and restlessness starts in me. So, I never know where I’m going to start. For me, collage is the phenomenon of spontaneous encounters between distinct fragments of particular universes that, in the act of being cut, torn, and glued, reveal their secrets, which we have not known until then. This is the magic that I see in the collage, being able to give new life to a printed image/text, which perhaps would be lost in time, forgotten in a drawer, or discarded due to an expiration date, of what was imposed on them to communicate.

* Transver – there is no translation for the expression ‘the imagination transvê’ – the imagination trans-see -, because it is an idiolect of the poet Manoel de Barros, it is like a look that’ transforms, transfers and converts something, within a set of similar things, in something else, in our imagination, for their similarities. 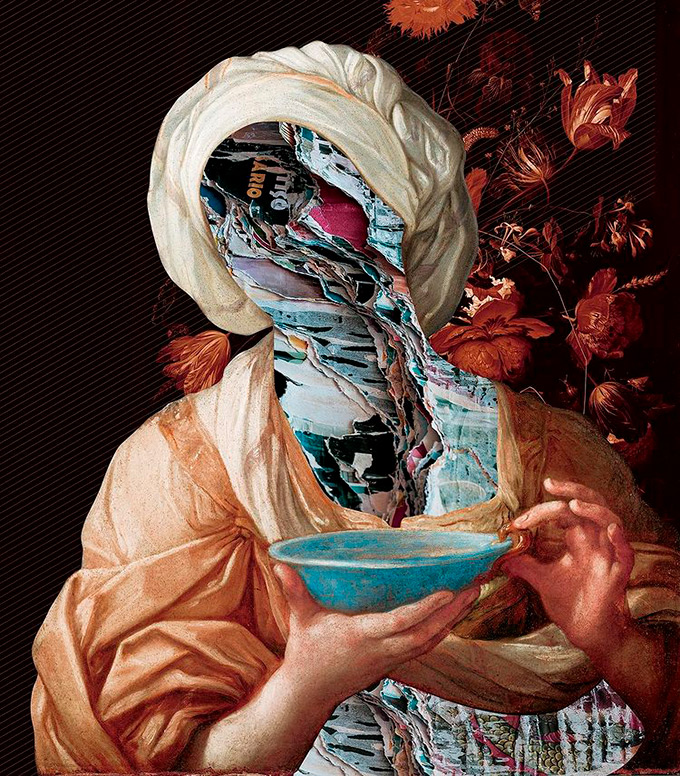 How would you describe your relationship to old paper as a working material?

The old printed material is out of my time, this already makes it easier for me to propose ruptures since they are no longer obliged to result in intended meaning. Contemporary materials are saturated with signs that carry the obviousness of their time. The images that I cut out – I would say rescue and resurrection – from any old print, have become timeless and can circulate in time and space, free from having to say something predetermined, like when they were used in advertising communication, on the packaging, and labels, or any other promotional form. I perceive that there is a  magical reciprocal between the fragments cut with the act of collage composition, for me it is as if such elements demanded that we give them a new function of existence, considering that these fragments are always removed, or displaced, from a context previous. And that, in the spontaneous flow of a new composition, the meetings end up prolonging the existence of such fragments, as they place the same images/texts in front of new encounters, thus, they end up generating new compositions that are the result of previous realities, sometimes inaccessible, but which, at the level of the imaginary, open up to new poetic possibilities.

What are your favorite source materials? How do you find them and do you spend a lot of time while looking for them?

I like to use any kind of printed material that is no longer useful, I look for all the things that have been discarded. I really like to experiment, so in my collage you can see a great mix, both for analog collages and digital collages. I try to bring to my creative processes experiments with paints, monotypes, stamps, stains, dirt, and graphic noise, which are always welcome, I like the interferences that cause strangeness and visual discomfort. Some fragments that I use, in certain compositions, did not necessarily come from the prints I mine in stores that sell old books and magazines, sometimes they are fragments that I photographed or collected from the prints pasted in urban spaces, which suffered a natural or spontaneous degradation, and the streets are full of them.

What your art and collaging mean to you?

Poetry and collage have become my great passion, they renew my look at things, they allow me to think and do, they do not let me stop or stagnate. They also help me to circulate in time. I have been doing visual poetry and collage for about 25 years, this is my constant exercise, without them I would have been outdated and would have become a blind person, with both eyes still in perfect condition. 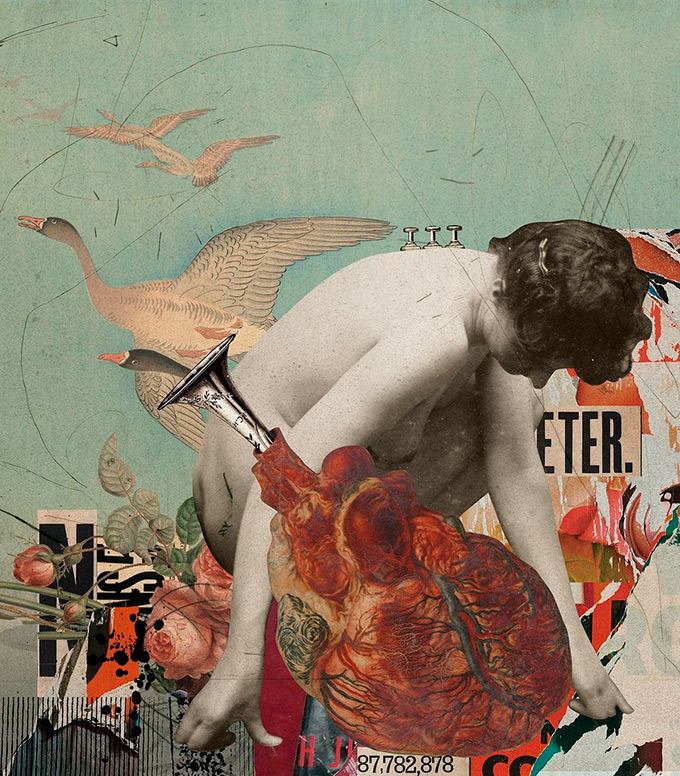 You being a designer and professor of design, how those things have affected you as an artist? Can you let go of the designer/professor side of thinking when it comes to creating something?

I cannot separate the two areas of activity – being a designer and being a teacher – the two practices are mixed in me, I need both, and I can reconcile them well. I believe that I am better as a teacher, or at least I always try to improve as a teacher, because I never stopped creating. Parallel to my academic work, I continue to do professional projects, but I also create things to exercise my mind, I dedicate myself to creating things that perhaps only serve me, my eyes are restless, my mind does not rest. I started to post my creations because my students knew my process notebooks and were delighted, and they demanded that I have a way of publishing, they wanted me to go further. They were my biggest supporters. I have the honor and privilege to teach a specific collage discipline in the design course where I am a teacher. I believe that the school where I work is the only one to have a collage discipline in its curriculum, I can state this by referring to the State of Minas Gerais. I think that teaching collage is as important as teaching other methodologies of design practices. To know how to build, it is first important to know how to deconstruct.

Do you observe your development as an artist? When was the last time you had an AHA – moment while collaging and what was it?

I’m very attentive to everything that I have created, that’s why I need to move between the practices of analog and digital creations, I don’t just stick to one technique, I believe that the art I have done is a mixed technique art. When some creations start to have a repeated aesthetic, I see that it is time to start new material searches to propose new languages. Recently, when attending a delivery service, I found on the floor, at the gate of my house, a fragment of a political campaign form, which had been discarded, and which suffered spontaneous action from time, because it was raining. The ink on the print had worn out and the paper tore, resulting in a cut that would not be possible with scissors or a stylus – I picked it up. Later, I used this fragment in an analog collage, it is the great noise of the composition, it is the first fragment that people perceive, it is as if he were screaming for having gained a continuity of existence. I do not like to use domesticated images in my compositions, those that we find in a magazine, and create a great expectation about it. These almost always do not make any surprises possible.

“The important thing in creation is to experiment without fear of making mistakes.”

What is the best advice about making art you have been given?

I remember with great affection some teachers I had in college when they told me something about not being afraid to try different paths. Different paths refresh our view of things. This taught me not to lead creation to obviousness, everything that is shallow and superficial does not allow satisfactory immersion. But, perhaps, the greatest piece of advice I have come from poetry by the poet Manoel de Barros when he says: “Repeat, repeat – until it is different to repeat is a gift of style”. For me, it is the same as saying, if you want to become good at what you set out to do, do it again and again, until they recognize you in the things you do so that they move, leave you, to become an experience for each other. The important thing in creation is to experiment without fear of making mistakes.

Certainly ‘Experimentation’. I believe that one thing comes as a consequence of another. If you are in the habit of researching, collecting, and retaining, experimentation becomes a great necessity. And we only create in the face of some need.

Samuel Eller around the internet 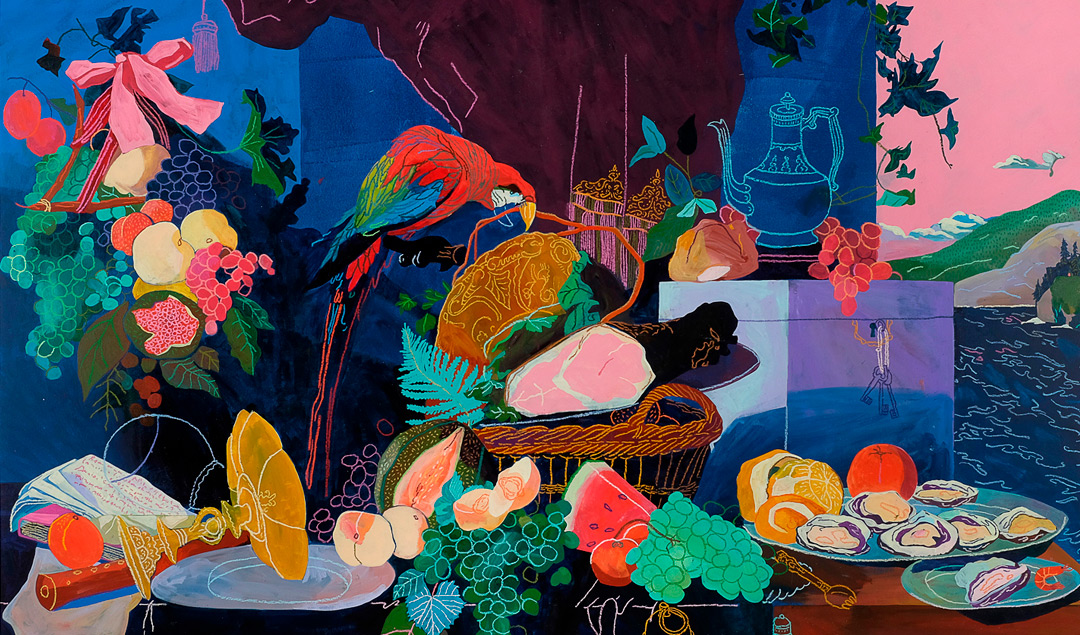 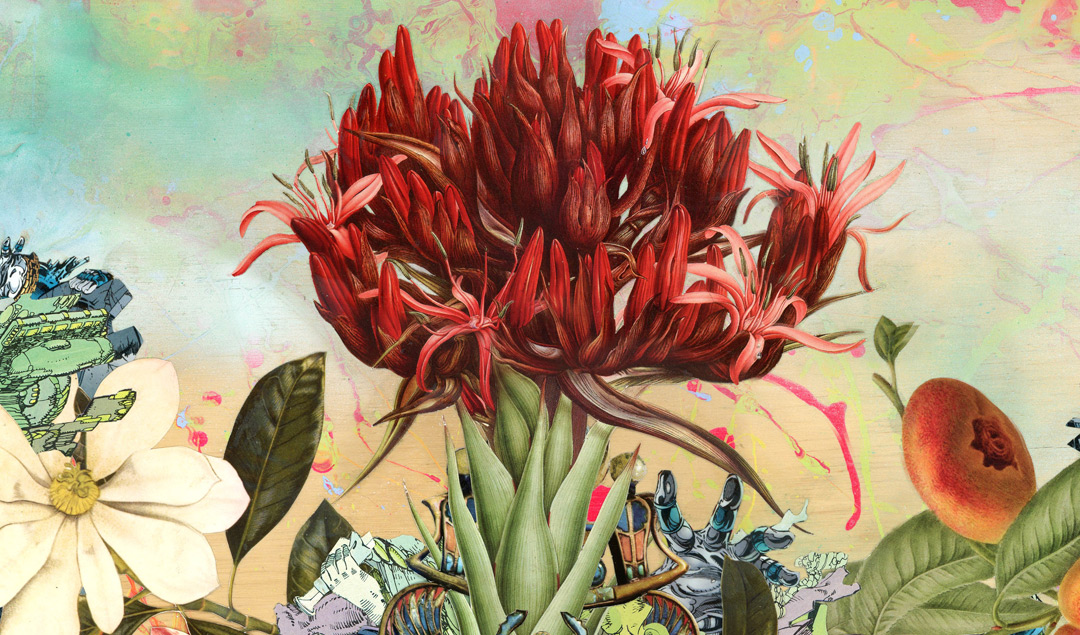 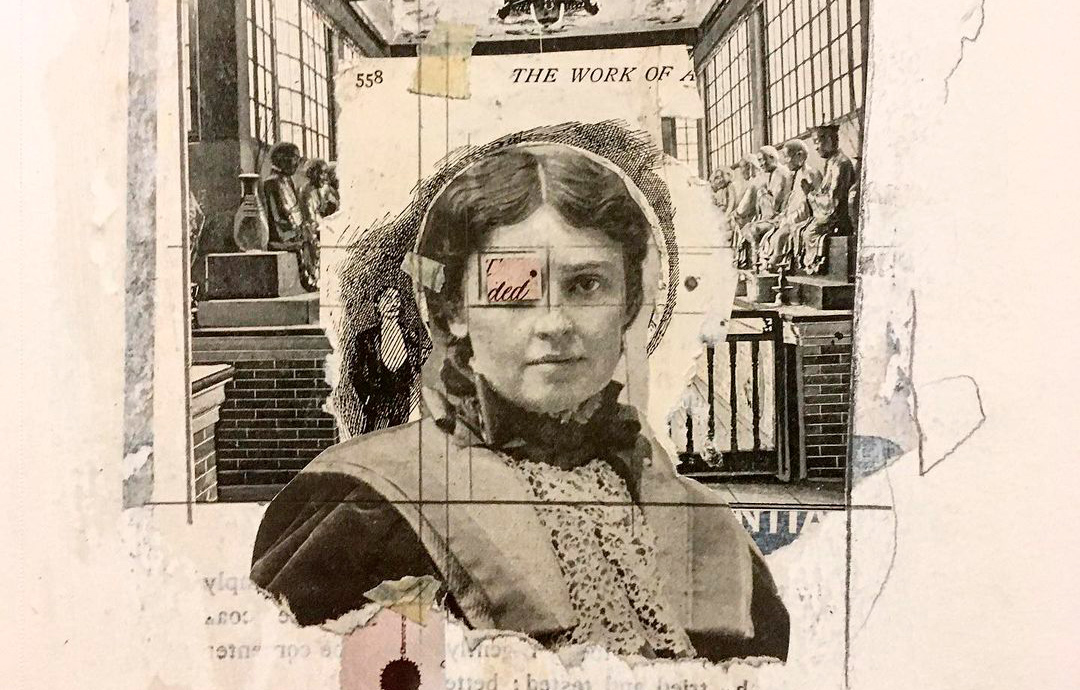